My ten-year-old plays the trumpet. I’m not just saying this because I’m his mother or because we have the same soul-searching eyes and fiery tempers, but this kid can play. I mean, he swings. He blows, bounces, and blips like he was born in the wrong decade.

He squeezes his lips for those high notes. He gets his horn to purr in those low jungle growls. He even harmonizes with the melody as he plays along to my old cd collection.

And because he’s ten years old, he doesn’t realize how good he is. You can tell him he’s good but he’ll just shrug or roll his eyes or tell you it’s easy and you could do it if you really wanted to, that he doesn’t even like playing the trumpet, it’s just something he does. But I see how lost he gets in the repetition, in the beat, in the call and response. How he can’t hear us holler when we are standing right next to him. How his foot turns into a drum, keeping time as he plays along. This is when he is most himself.

He likes to practice outside on our deck. In the early years, I felt bad for our neighbors. He’d belt out a note so shrill, not unlike a call to battle from the Lord of the Rings films. It sent shivers up my spine, make me think I should look out the kitchen window, to the clouds just in case it was the Second Coming, but there he’d stand, his cheeks pink with glee, completely oblivious to the sudden barrage of barking dogs in our neighborhood.

I felt bad about all this racket until we crossed paths with our neighbor, Mr. Wei, who only speaks Chinese but made a grand effort to communicate how much he liked hearing the music from across the street. Now, if it’s cold or raining, my son opens his bedroom window and points his horn outward to make certain Mr. Wei can hear.

It all started as a fluke. Three Christmases ago, his older, grown cousin passed on an old trumpet as a gift. We didn’t think much of it but a few months later my son asked for lessons. On the way to that first lesson, his eyes shone in such a heartbreakingly beautiful way. He smiled till his eyes disappeared into little half-moons. I wondered if I had ever been that excited about something as a kid.

It was nearly embarrassing to see such unabashed joy.

It’s embarrassing to see, not because I frown upon such displays of emotion but because I wish this for myself. Did I ever know this joy? And if I did, when did I unknow it? Can I find it again?

I wish I knew what it feels like to get lost in music, in craft, in joy, in love, that I don’t care what it looks like from the outside or what others might think about it. I wish to find something that gives me permission to be goofy, silly or even more confident, the way the trumpet does for him. I wish I knew what it felt like to not realize I was doobie doo-ing the notes for Don’t Get Around Much for two hours before my brother conks me on the head and tells me to stop. 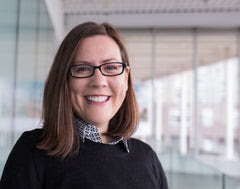 Shemaiah Gonzalez is a freelance writer with degrees in English Literature and Intercultural Ministry. She thrives on moments where storytelling, art and faith collide. She is published at Image Journal's Good Letters, Barren, Fathom, and Relief among others. She is pursuing an MFA in Seattle where she lives with her husband and their two sons.

Photo by MI PHAM on Unsplash

As a musician, I totally related to your story. Even if he never turns “professional,” this is a joy he can return to his entire life!

I loved this piece and the way it flowed like music, and held me captive music can.. The line, “He smiled till his eyes disappeared into little half-moons,” encapsulates the expression of joy so well.

This brought joy to my soul and spirit. And brought a smile to my face!